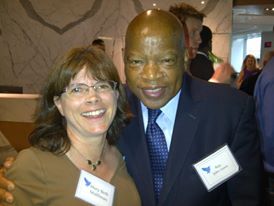 Dr. Mathews teaches and studies American and European religious history, with a focus on late nineteenth and early twentieth century Protestantism in the U.S.  Her first book, Rethinking Zion: How the Print Media Placed Fundamentalism in the South, was published in 2006. Her second book, Doctrine and Race: African American Evangelicals and Fundamentalism Between the Wars, will be published in 2017 by the University of Alabama Press.

Professor Mathews graduated from the College of William and Mary and then worked on Capitol Hill for nine years.  She then left politics and earned her Ph.D. in Religious Studies with a concentration in European and American Religious History from the University of Virginia. When she’s not pursuing scholarship, she can be found at the nearest yarn store or coffee shop, or she’s following her beloved Washington Capitals and Washington Nationals.

Dr Owen is a historian of the American Revolution and early American republic, with a particular focus on political mobilization and organization. He has published essays in the volumes Between Sovereignty and Anarchy and Practicing Democracy, both through the University of Virginia Press. His book manuscript, Political Community in Revolutionary Pennsylvania, 1774-1800, has been provisionally accepted by Oxford University Press.

Before moving to Illinois, Dr Owen taught at Ohio University and the University of Sussex. He received his DPhil, MSt, and BA from the University of Oxford. He teaches courses in early American political history, intellectual history, Native American history, and the history of sports in the United States. Dr Owen also has an interest in digital history. He is a founding member of The Junto, a group blog on early American history, and is the host of a regular podcast, The JuntoCast.