Like any group offering service and selling materials to the public, the Nuwaubian Nation required time-consuming oversight and careful planning to ensure the health of the organization. While male members were required to sell religious materials to raise money, the women of the movement played a behind the scenes role in the operations of the bookstores. Women proved vital to the administration of the Nuwaubian movement, contributing hours of work to typing up the sermons of Dr. York which were in turn sold in the various bookstores.1 York’s wife took on the responsibility for the movement’s finances. 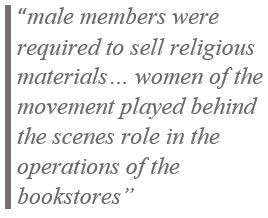 According to Dr. York’s son, Jacob, the ACC’s success as an organization relied largely on Dr. York’s first wife who ran the finances and (again, according to Jacob) allocated York’s allowance of 25,000-50,000 each week.

“My mom oversaw the whole operation in Brooklyn. We used to have a bookstore, a Laundromat, a restaurant, grocery store, and apartment buildings. She was in charge of finances for the ACC…”2

Though evidently responsible for grounding the fledgling organization, this wife eventually left the group due to disagreement over financial administration. She was angered when York disregarded money saved for the Nuwaubian children’s college fund, opting for lavish weddings and spending huge sums on buying and repairing an area in the Catskills as a retreat place called Camp Jazzir Abba instead.”3 Stories like these paint a picture of Dr. York as the charismatic face of the movement while a team of members ensured the smooth operations of the movement, financially and logistically.

Everyday, “entry level” members held important roles in the system’s structure as well. Men in the group were expected to contribute to the supply of income through peddling doctrinal publications and incense.4  The expected daily quota hovered around $35-$45 dollars a day. The male members were spied on by their sister members and punished if they did not meet the quota.5 In this way, the movement benefited from the magnetizing personality of York and his spiritualism as the focus of the movement, while York benefited from the behind-the-scenes work of his members.