The Nuwaubian Nation, while unique in their specific blending of Islamic, Afrofuturistic and Egyptian elements in their religious beliefs and iconography, exists in a lengthy and complex history of black separatism and religious, black movements in the United States. The Nuwaubians, thus, were not sustained in isolation, but rather functioned in a larger dialogue of interest in black nationalism and attempts at political, social and cultural autonomy. The political influence of this ideology peaked during the latter half of the 20th century, which encompasses the bulk of the Nuwaubians’ active period.1 Thus, to delineate the development and ideological structuring that influenced the Nuwaubians’ religious strand of black nationalist separatism requires examining the cultural context that, to some extent, informed how the Nuwaubians themselves constructed and perceived their beliefs.

equat[ing] ‘racial’ with ‘national’ goals. Bound together by ties of history, culture, and kinship, [black nationalists] conceptualize as being differentiated and (at least potentially) separated from competing social and ethnic groups.3

This view of black liberation, which saw black America as an “oppressed ‘nation with a nation,'”4 led to the specific strand of black nationalism that saw the rise of black separatism. Thus, it should be understood that black separatism is inherently black nationalist, as 20th century black nationalism often engages with the belief that “the right to self-determination was inherent in all nations,” of which the black population in America presented a “‘internal colony’ of the United States,” resulting in the assertion that to see “the end of their exploitation, African Americans had to gain control of land and political power through national liberation.”5 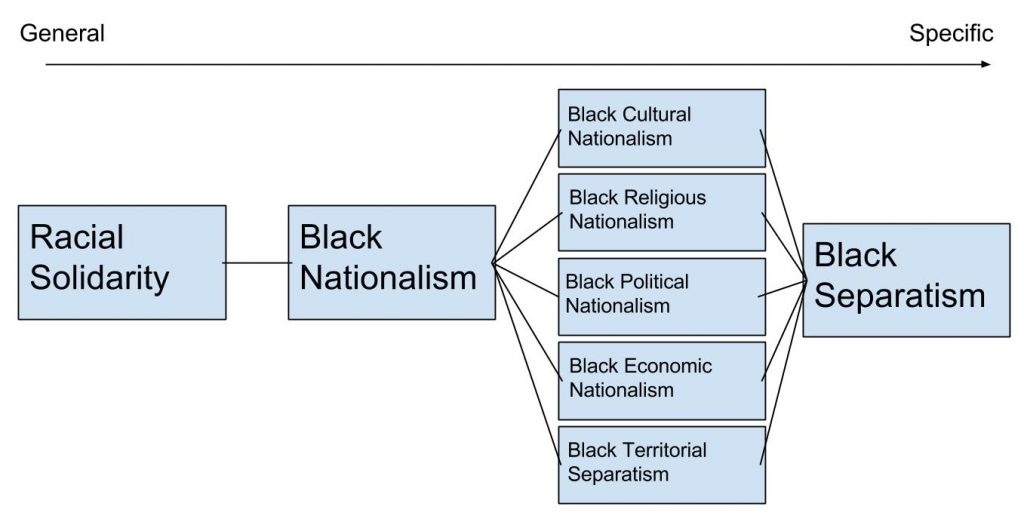 The Nuwaubians clearly acted within this trend of black nationalism of the 20th century, as the Nuwaubian model that developed within the movement “had tenets of Black Nationalism, Pan-Africanism and their theoretical framework sister Afrocentricity in its stated mission of charting a path for black intellectual emancipation via pragmatic separatism.”6 Further, York himself was a former member of the Black Panther Party, so the relationship between the Nuwaubians’ mode of black nationalism and its resemblance to other black nationalistic groups suggests its deliberate positioning within the dialogue of 20th century ideological and pragmatic black nationalism, rather than a coincidence of social circumstance.7 As such, understanding the unique presentation of the Nuwaubian Nation’s religious, black separatism must be considered more broadly within this cultural context, as it informs how, why and to what effect the Nuwaubians develop and employ their belief system.

Contextualizing the Nuwaubians’ black separatism as a specific iteration of black nationalism further opens up the group as it provides elucidation as to the group’s religious actions in relation to their political and ideological. The Nuwaubians acted within the understanding that “[i]ntegration [rather than separatism] would amount to absorption because the dominant European culture upon which America was built on would guzzle every other one in the process of integration.”8 This desire to preserve, separate and distinguish oneself from the white, American hegemony displays the nationalistic tendencies that underscore the separatist actions. As one of the group’s own doctrinal writings, collectively referred to as the Holy Tabernacle Ministries, refers to integration as “‘slavery, disease, unholiness and . . . ignorance'”9 which is “slowly destroying you [the black American],”10 it is clear this is a paramount social concern of the Nuwaubians, channeled within the framework of their religious doctrine. The two are intrinsically and inherently intertwined, which makes their categorization as a religious, black separatism group so paramount–their efforts are not merely spiritual or political, but rather, The Nuwaubians utilize both the religious and political to achieve a greater condition of black liberation, a goal within the same trend of the forebearer.