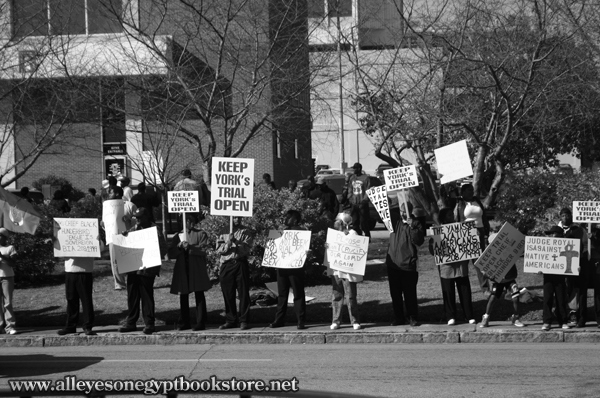 Due to the nature of York’s position, the charges brought against him, and the history of the United States government’s actions when confronting alternate religious movements, the arrest and sentencing of York is not without its controversies. While it is not within the scope of this project to assess the validity of York’s arrest or his guilt, we will examine the trial and some potential objections brought forth following York’s arrest.

While there is a strong presence claiming York’s innocence, this presence comes from largely within the Nuwaubian movement. Many of York’s followers or otherwise sympathizers “allege conspiracy by the American government to imprison their leader because of the non Western thoughts and conventions he espoused.”1 Further, they claim “his trial was a miscarriage of justice and that many of the witnesses used against him were coerced or bribed, many of whom later recanted their testimonies.”2 Given the complicated nature of how the trial proceeded following York’s arrest, it is at least within the bounds of this project to suggest that at least an examination of the trial is warranted.

Additionally, there is the concern of “overwhelming public ignorance and media-generated prejudice towards unconventional religious movements,”3 and specifically the Nuwaubians as a black religious movement. Further, some critics suggest a system that befalls all black movements within the United States:

[…] it’s what happens every time African-American people get together and start to get organized. Then they are viewed as a threat! The leader is arrested and accused of something, their property is taken away and their community is broken up and dispersed. And it isn’t because they’re an ‘NRM’ [New Religious Movement] […] it’s because they are Black!4

While this project cannot fully assess the full nature of supression and misunderstanding that befell the Nuwaubians, it is pertinent to note that the Nuwaubians did face clear discriminatory bias both within the media and the law. Works such as Bill Osinski’s Ungodly: A True Story of Unprecedented Evil5 and articles such as Francky Knapp’s “We Just Walked into America’s Creepiest Egyptian-UFO Cult”6 suggest clear bias and presupposition on the part of the public and the media towards the Nuwaubians.

Further, it is significant to note that following York’s arrest and conviction, the Tama-Re compound–which, at the time, was not under York’s name7–was seized by the Georgia government and then raized.8 Following this, the land was sold and is now private property; profit received from the government forfeiture were split between the Putnam County Sheriff’s Department, the FBI and the IRS.9 Given the previous zoning conflicts that transpired between the Nuwaubians’ and the Putnam County Municipality, it is clearly evident the convenience of such a seizure of property.

All these controversies are to say that the trial of York was neither without its contemporary dissenters nor is study of the trial irrelevant now. Rather, the authors of these project would like to suggest its multiple, complex facets and further recommend an unbiased and unsensationalist view of the trial and its proceedings for the interested reader.

5 Bill Osinski covered the Nuwaubians and the trial of York for the Atlanta Journal-Constitution, with his book acting as an accusation of York of using religion as a mode for committing moral and criminal misconduct.

6 Francky Knapp’s article appears on the Messy Nessy website and features sensationalist language and poor attempts on the part of the author to thoroughly and accurately depict the Nuwaubians and their unique doctrine.