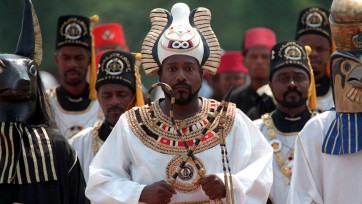 The Nuwaubian Nation presents a unique case study through the internal and external forces that influenced and determined their specific iteration of religious, black separatism. The Nuwaubians experienced a number of doctrinal and iconographic shifts throughout the course of their most active period, including the incorporation of elements of black Islam, Afrocentricity (often aesthetically present through Egyptian iconography) and Judeo-Christian borrowings. Further, rooted in these numerous changes rested a strong core of black nationalism and “pragmatic”1 separatist ideology which allowed members of the Nuwaubian movement to seek out economic and political autonomy within the bounds of the U.S. political and cultural sphere.

To understand the Nuwaubian movement requires tapping into this “black cultic milieu,”2 or more specifically the cultural current of black ideology that the Nuwaubian Nation drew from and existed within. To do this, we will examine the different facets of the Nuwaubians and the distinct ways in which other black religious and nationalist movements demonstrate influence on each distinct epoch of the movement. The Nuwaubian show clear situation within the traditions of “Hebrew Israelite, African American Islamic groups, and black Christian Nationalist tradition” as they “seem to combine information from all of them to make up their own unique belief system.”3 This is demonstrated in the literature of the Nuwaubian movement, largely attributed to York, which spans topics including “Jesus Christ (Who Was Jesus Father’ n.d.), the Anti-Christ (Be Prepared for the Anti-Christ n.d.), the Moors, the Koran, W.D. Fard, the Egyptian Book of the Dead, Freemasonry, Elijah Muhammad, and ufos.”4

By examining each facet of the Nuwaubian belief, both in terms of what remains relatively constant in comparison to that which evolves or otherwise changes during the group’s active period, we can identify the unique position of the Nuwaubians within the cultural context of black ideology and belief to better understand the claims the Nuwaubian Nation makes to separatism and how those claims are informed or otherwise influenced.