Understanding the role of women in the Nuwaubian movement presents a complex and problematic challenge, as, despite women as vital actors in the Nuwaubians’ relative success, it would be easy to also delineate a map of their exploitation.1 Primarily, it is significant to note that an examination of the treatment of women in the movement is not merely a gendered analysis, but a racial one as well, as any specific doctrine the Nuwaubians propagated on women specifically detailed the black woman. Further, the role women held in the group must be understood religiously, socially and materially, so as to fully grasp the nuanced ways in which women existed and participated in Nuwaubian life.

[York’s] treatise on women and religion as well as the ideal role for African American women in black communities positions York, and indeed Nuwaubians, as genuinely interested in black women’s welfare in particular and African American households in general.2

She recognizes this position as “idealistic;”3 however, it introduces the framework for understanding the religious and social function held by women within the group, as Anaedozie proposes the Nuwaubian doctrine as a critique of white masculinity.4 Thus, the role of women—within the implicitly created dichotomy proposed by invoking masculinity—manifests religiously in addition to its more overt social form. Although the Nuwaubians are primarily concerned with racial discourse, rather than that of gender, “sometimes, dialogue on one leads to the other,”5 which allows for the intersection of race and gender in the Nuwaubian doctrines.

One example of this is the Nuwaubians “black devils,”6 which exist in both male and female forms. The female devils, who “manifested in physical forms as freaks and whores,” to the Nuwaubians implied “gender equality” as “the female, like the male, come in both good and evil forms.”7 This instance of black devils constructs the framework that allows further study of Nuwaubian belief in relation to women, as it follows a similar pattern of rejecting white and Christian8 notions of womanhood and substituting it with its own. Thus, the role of women is significant both religiously and socially, as women feature specifically within the beliefs of the group, with their doctrine suggesting “women, with their power […] have the potential to be great and dominate nations.”9 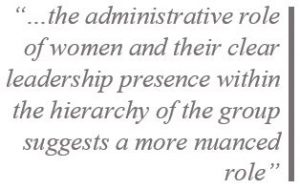 However, women within the Nuwaubian movement did not perform a mere ideological or theoretical role. Although there is discussion surrounding the temporary veiling of women and the emphasis placed on women’s role domestically,10 women were crucial to the administrative operations within the movement and performed much of the day-to-day work that allowed the group’s financial and propagating endeavors to operate. During the Nuwaubians’ time as the AAC, while men acted as “Propagators of the Knowledge,” spreading their doctrine on the streets of New York, women typed up the physical scrolls containing the knowledge itself, which went on to be sold in the groups’ bookstores.11

Further, York’s son Jacob York—the son of York and his first and only legal wife—credits the financial and propagational success entirely to his mother, whose “hard work and skill as an administrator” played a larger role than York’s own capabilities as a charismatic leader.12 Jacob further describes:

My mom oversaw the whole operation in Brooklyn. We used to have a bookstore, a laundry mat, a restaurant, grocery store, and apartment buildings. She was in charge of finances for the AAC and had been saving up to send the kids to college.13

Here, Jacob York details the extremely significant role his mother took on during the movements’ early days and before she herself left the movement. The administrative role of women and their clear leadership presence within the hierarchy of the group suggests a more nuanced role for how to view women in the movement, rather than merely through the lens of criticism or exploitation. The success of the group cannot be separated from the work women performed within it, which, regardless of shifting doctrine or other broader social structural changes that the Nuwaubians frequently underwent, remains a constant throughout the movement’s history.

1 Given that the charges rested against York were primarily brought forth on account of young girls and women, the exploitation of women in the Nuwaubian movement should primarily be discussed through this lens and necessitates more nuance than is within the purview of this page to examine.