After the initial construction on the Nuwaubian’s new home on 473 acres in Putnam County countryside, Dr. York relocated the group from Brooklyn to the  compound, first outfitted with living structures as well as pyramids and a sphinx that held religious/cultural meaning to the group. Somewhere between 100-500 strong, the Nuwaubians made efforts to expand the compound to offer a full array of services to the community, constructing a health-food store, a recording studio, a taxi company, and a a social club.1 Tensions rose when local authorities tried to halt development, claiming the land was zoned for agricultural and not commercial use.

In April 1998, a judge fined Dr. York’s agent Victor Greig $45,750 for zoning violations in operating the nightclub 1) on agriculturally zoned land 2) when the structure had been approved as a storage shed and 3) without a certificate of occupancy (a document ensuring the structure abides by state safety regulations). Greig likened the club to a private hunting lodge, stating that only members and their guests attended the club, but the judge dismissed this as illogical, and in addition to the fine, asked Sheriff Sills to cut of the utilities to the structure.2 In 1998, the buildings in question were padlocked and closed down resulting in protests of the frustrated Nuwaubians. The legal battle quickly become a race issue as Nuwaubians claimed racial oppression by the surrounding white residents. 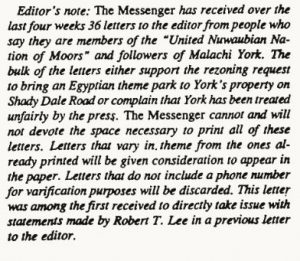 The Nuwaubians in no way submitted silently to the judge’s decision, voicing through writing to the “Letters to the Editor” section of the local paper, the Eatonton messenger. In this note under a Nuwaubian defense of the organizations development and activity in general, the editor records: “The Messenger has received over the last four weeks 36 letters” from members, the majority treating zoning issues or the press’ mistreatment of York, going to explain “The Messenger cannot and will not devote the space necessary to print all these letters.”3 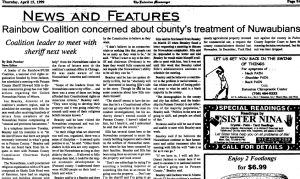 Frustrated by the lack of response to local protests, the Nuwaubians appealed via letter to the Rainbow Coalition in Chicago, resulting in southern director Joe Beasley’s appearance and defense of the group’s development and rights to exist as an organization. Nuwaubians felt they were not “being afforded their Constitutional rights as American citizens.” Beasley reprimanded the community, telling the Messenger, “people can be as nutty as they want to be… What I want to say to the sheriff and chairman is we hope they would fully cooperate and not impede (the Nuwaubians’) ability to be all they can be.”4

The padlocks were eventually removed (with the exception of the social club), but the damage was done. The complaints from the Eatonton community and the accusations of racial bias from the Nuwaubians remained throughout the group’s activity in Putnam. Beginning sometime between 1997-1998, the FBI identified the group as needing surveillance and began to spy on the group, keeping track of the group’s activities and security systems.