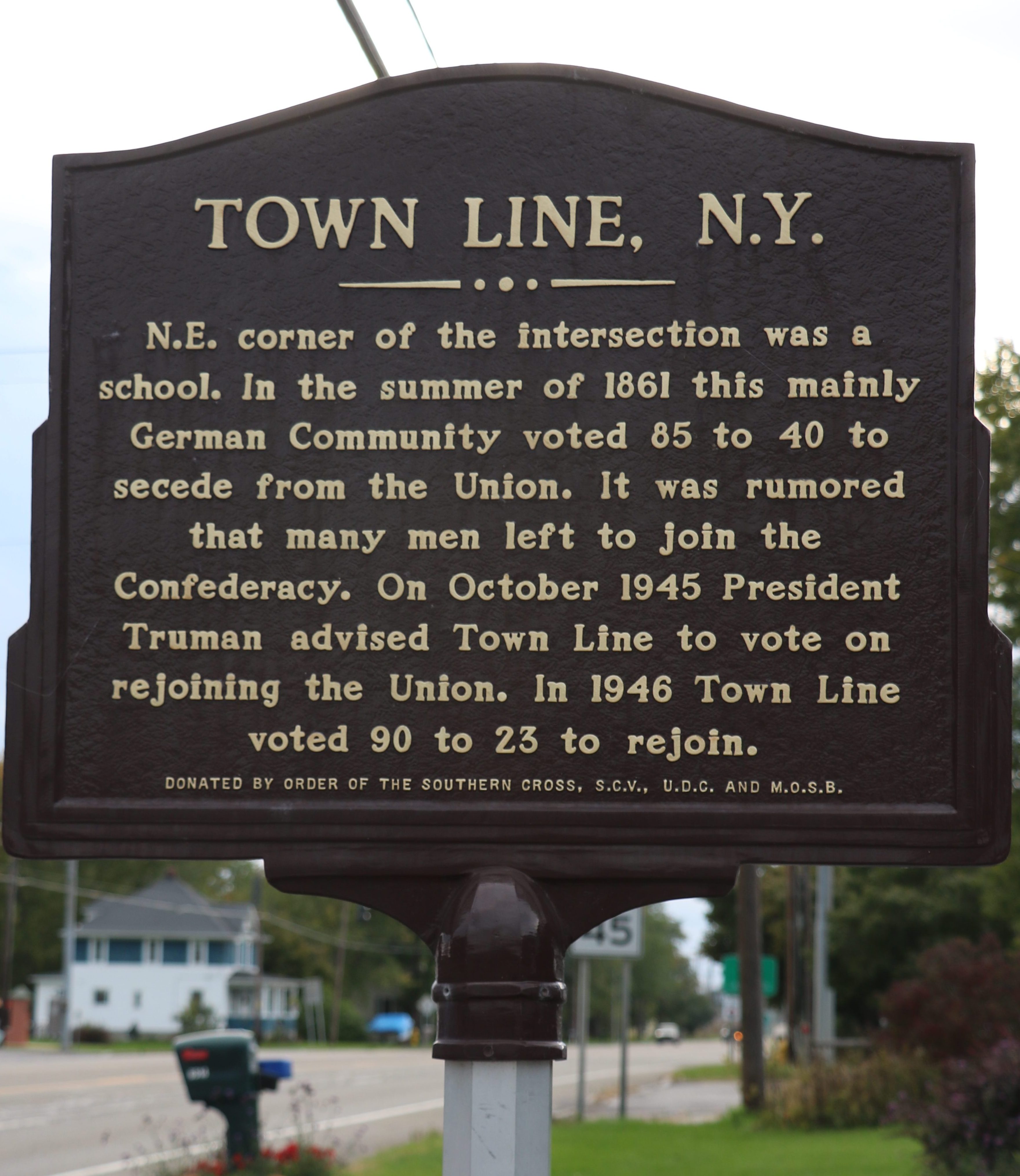 Plaque erected by the Sons of the Confederacy, located outside of Blair’s Hardware Store in Town Line, NY. 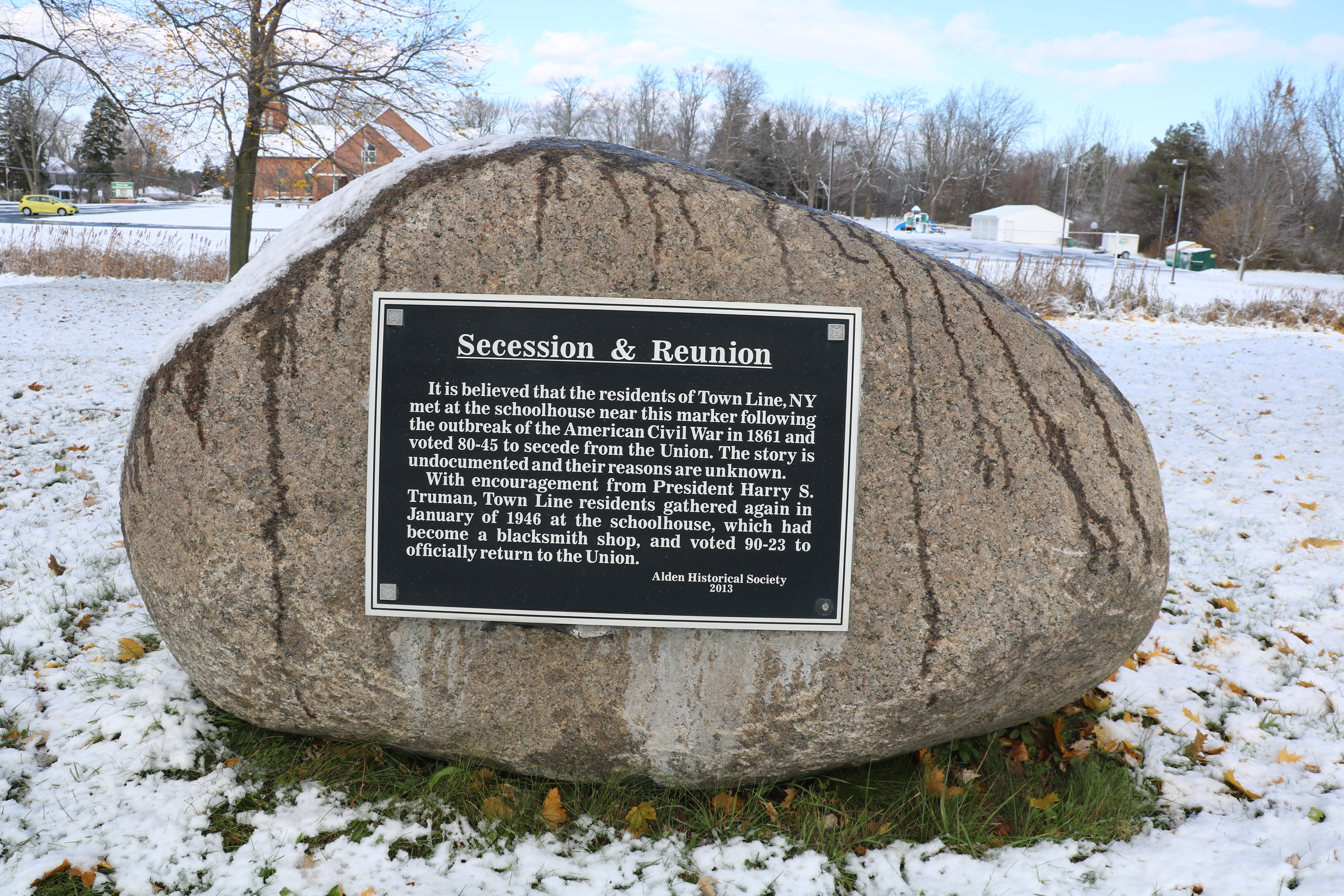 Plaque erected by the Alden Historical Society in 2013, titled “Secession & Reunion”. The plaque lies a few hundred feet from the Town Line Lutheran Church, close to the original site of the blacksmith shop.

On the 152nd anniversary of the Town Line secession, in 2013, the Alden Historical Society erected a plaque to commemorate Town Line’s vibrant history. Sitting a few yards off of Route 20 and on the property of Town Line Lutheran Church, the plaque denotes the approximate original location of the blacksmith shop and schoolhouse where the votes to secede and rejoin the Union took place. The plaque reads,

Secession & Reunion – It is believed that the residents of Town Line, NY met at the schoolhouse near the marker following the outbreak of the American Civil War in 1861 and voted 80-45 to secede from the Union. The story is undocumented and their reasons are unknown. With encouragement from President Harry S. Truman, Town Line residents gathered again in January of 1946 at the schoolhouse, which had become a blacksmith shop, and voted 90-23 to officially return to the Union. – Alden Historical Society (2013) (1)

Interestingly enough, the plaque mentions nothing about Town Line joining the Confederacy and only emphasizes secession from the Union. Karen Muchow, archivist of the Alden Historical Society, points to the lack of evidence that the hamlet actually ever joined the Confederacy. “Because of the timing (1861)”, Muchow recalls, “it was assumed that they seceded to join the Confederacy.” In all the source material at Blair’s Hardware Store and Museum and the Alden Historical Society, however, documentation does not exist to prove this relationship.

A few years later, local members of the Order of the Southern Cross and Sons of the Confederate Veterans decided to invest in their own plaque to honor the town’s history. The second plaque is situated just down the road in the parking lot of Blair’s Hardware Store, the current home of an informal museum on Town Line’s history. Whether of their own accord or in response to the previous plaque, the founders of this plaque portray the history in a different light. The plaque reads,

Town Line, N.Y.: N.E. corner of the intersection was a school. In the summer of 1861 this mainly German Community voted 85 to 40 to seceded from the Union. It was rumored that many men left to join the Confederacy. On October 1945 President Truman advised Town Line to vote on rejoining the Union. In 1946 Town Line voted 90 to 23 to rejoin. (2)

These rumors regarding men from Town Line who supposedly joined the Confederacy pervade written accounts of the secession. Time and time again, sources claim that five men from Town Line were sent south to fight on the Confederate side of the war, but Muchow has found no evidence of these claims, even after scouring archives and passed down materials.

The second plaque reveals the deep Southern pride felt by some residents of Town Line even today. Lisa Blair, owner of Blair’s Hardware Store and keeper of the informal museum inside, insists that although the two plaques may seem contradictory, that “there was no controversy really.”

So which plaque is more accurate? Both shed light on important aspects of the history – the local pride in a movement far from home and the more skeptical interpretations of the limited resources that remain.