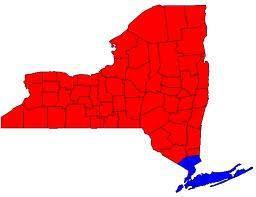 There are some significant roadblocks to upstate New York secession. Both the legislative and constitutional strategies have flaws that could prevent them from really getting off the ground. On the legislative side, there are problems with getting the necessary bills through committee, gathering enough votes, and even publicizing the movement. While Senator Robach and Assemblyman Hawley have been pursuing a referendum on secession since the early 1990s, they have not yet had any luck getting their bills out of committee, despite repeated efforts. This would seem to indicate a lack of interest which may translate into a lack of votes in the future. There are also challenges related to public knowledge, as the referendum does not seem to be talked about often on the news or on either legislator’s social media pages.

On the constitutional side, there are likely to be issues with delegate selection, and even with passing the constitutional convention referendum in the first place. As Assemblyman Hawley pointed out, delegate selection is likely to favor political types rather than ordinary citizens, and there may be more downstate than upstate delegates. This makes it seem unlikely that secession would be supported by most delegates to the convention. Furthermore, there is a chance that the 2017 vote for the convention will not pass. Some influential groups are vocally against a convention, such as New York State United Teachers. Without a focused effort to encourage New Yorkers to vote yes to the 2019 convention, it is unlikely that the convention will even take place.

Even if one of these plans eventually secedes, it it ultimately up to the federal government whether or not to admit a 51st state to the union, which is another potential hurdle. No new states have been added since Hawaii in 1959, so it is unclear whether upstate New York would have any success here. Overall, these obstacles make it seem unlikely that secession is in Upstate New York’s near future.