Is secession a viable solution? 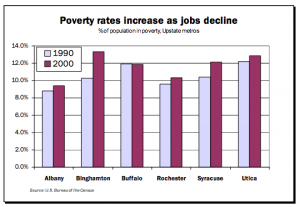 One of the most pressing questions for the upstate secession movement is whether secession is really a viable solution for upstate New York’s problems. If upstate New York were to become its own state, it would face significant challenges. Economically, secession would be difficult for upstate. Based on data analyzed by PolitiFact, upstate New York would have some of the lowest economic indicators in the country if it became its own state, including income per capita and average wage, although unemployment rates would be better. Relatedly, as both Assemblyman Hawley and Assemblyman Barclay have pointed out, there is the issue of balancing revenue and expenditures. Upstate currently benefits from downstate tax revenue, with Wall Street accounting for almost 20% of state revenue. As its own state, upstate would have to balance this loss of revenue by cutting social services like Medicaid. This could result in a loss of health care and other services for many, given the low average wage and low per capita income figures, as well as increasing poverty rates. It seems that there is the potential for upstate secession to be economically hurtful rather than helpful to its citizens.

There are also political challenges. While secession may gain upstate New York some political freedom on the state scale, upstate would perhaps sacrifice its influence at the federal level. Given that upstate has a smaller population than downstate, it would have fewer representatives in the U.S. House of Representatives than the new downstate. As Assemblyman Barclay has pointed out, both divided halves of New York would have less influence nationally than New York currently has, which could be harmful when it comes to potential regional issues where upstate and downstate do have similar interests.