If upstate New York is to secede, there are two main routes by which this could be accomplished. The first is through the state legislature, and the second is through amending the state constitution.

If the New York State Senate and Assembly pass the legislation introduced by Senator Robach and Assemblyman Hawley, the question “Do you support the division of New York into two separate states?” would appear on ballots throughout the state the following November. Based on the result of this referendum, the legislature  could then take further actions to pursue secession. However, given the repeated and prolonged difficulties Senator Robach and Assemblyman Hawley have faced in getting the necessary bills through committee, the legislature seems unlikely to pass the bills that would allow for this referendum anytime soon. 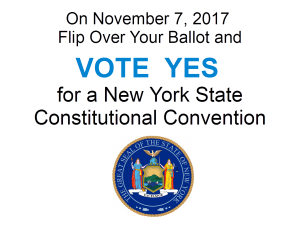 An alternative path to secession proposed by New Amsterdam NY is to present secession as a topic of constitutional interest at the next New York Constitutional Convention. New Yorkers would need to vote “yes” on the proposition to hold a Constitutional Convention on the November 2017 ballot, or no convention would be held. Then, delegates who support secession would need to be chosen to represent upstate New York at the convention. These delegates could then introduce upstate secession as a constitutional amendment at the convention, which would take place in 2019. However, as Assemblyman Hawley has pointed out, it will be difficult to get delegates who are sympathetic to or support secession, as current methods of choosing delegates tend to favor establishment political types and result in more delegates from downstate than upstate.