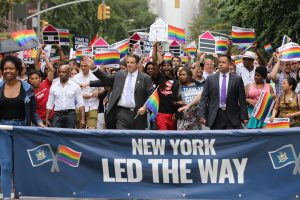 Historically, New York City has considered secession before. Recently, after the results of the 2016 election there have been rumblings among some New York City residents regarding leaving both the United States and the state of New York. Those who petition for NYC secession emphasize the liberal, gay friendly, fashion conscious culture of the metropolitan hub, and how it is at odds with the current administration.

This sentiment might be shared with the general population, but so far has been restricted to intellectual elites who write for New York City based publications such as New York Magazine. There have currently been no protest movements or social media pages dedicated to this issue. However, a prominent article in New York Magazine speaks at length about the type of culture an independent NYC would have.

How cool our currency, the York, would be. Vera Wang could design our flags. Groucho Marx would be on our stamps. Bill Clinton could be president again.

The arguments for New York City secession from the Union emphasize the large economy, population, and service sector of the city, comparing it to major countries around the world. However, the argument is primarily cultural, citing mostly political and social grievances against the leaders in Washington DC.