Industrial Revolution and a Declining Society 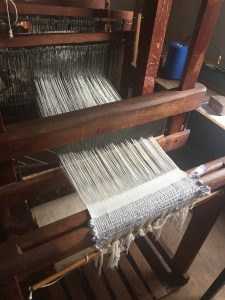 The Shaker culture depended on the conversion of outsiders in order to maintain their continued presence in their community, often adopting children from local orphanages as well. While the ideas and values appealed to many converts, the society began to decline in the mid 1800s and would continue to do so until present day, with the remaining two Shakers living in Sabbathday Lake, Maine.

The Shakers were well known for their achievements in technological improvements, developing and advancing everything from washing mills to brooms. They believed in devoting their lives to hard labor in the name of God and  they strove to create quality and reliable products. This quality and the general image of integrity that was associated with the Shaker name helped to strengthen the Shaker brand and build a lucrative business that would allow the Shakers to thrive in a competing world of trade. Their basic chair, meant to convey strength and minimalism, became a prized possession in the other World and became a symbol of a new age of minimalist style in America. The chair design grew so popular the Shakers applied for a patent to ensure the continued income could be gained from the production of the chairs.

The main reason for this decline was the age of the Industrial Revolution and the needs of the consumer growing for new products at faster and cheaper rates. While the Shakers were innovators of the time and helped to spur on the advancements of technology that would increase their efficiency, they were still a handmade industry that could not compete with the sheer output that the factories could produce. They loomed and weaved their fabrics by hand as shown in the dish towel displayed on the right. They weaved their own baskets and created their own brooms. While they embraced the use of technology, they also believed that the use of hard labor would help them to achieve their beliefs in a Heaven on earth and helped to follow God’s vision and so they continued to make by hand. 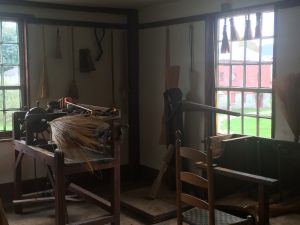 The Shakers were also famed for their design of the flat broom, which allowed for a larger sweeping area.