The United Society of Shakers, founded in the city of Manchester, England in the 1770’s by Mother Ann Lee, has roots in the United Society of Believers in Christ’s Second Appearing, a dissident Quaker sect. Known locally as the “Shaking Quakers” for their ecstatic form of worship, but simply amongst themselves as “Believers”, the Shakers practiced Quaker beliefs, such as pacifism, equality, and the concept that an official clergy was not necessary for worship. Defined further by their name, members of this society also believed in the concept of Millennialism; wherein the reappearance of Christ is imminent and will immediately be followed by 1000 years of Heaven on Earth before the final Judgement. Ann Lee joined this Society in the mid-eighteenth century and despite personal hardships soon emerged as a strong and vocal leader, eventually earning a reputation for having the gift of spiritual visions. Under the leadership of Mother Ann, the decision was made to relocate the religion to North America, arriving in Manhattan with 8 Believers in August 1774. 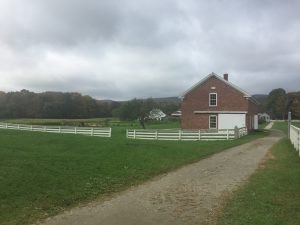 This website is aimed at being an educational tool for those looking to explore the Shaker Society (with a specific focus on the local Hancock Village), their beliefs and ideals and how they created separatist communities in the 1700s to mid 1800s in the United States. This project looks to analyze the movement as a whole and their general success at creating a Utopian, separatist society.

For more information about the project and its creators, please see our About pages.