Before and during their time as a collective, these women exhibited such as passion for the cause that they were moved to activism. Following the disbandment of the Furies, the women established a different approach to activism. Their activism transformed into being a more artistic pursuit. Joan Biren established a movie production company, Helaine Harris and Ginny Berson co-founded Olivia Records, and Rita Mae Brown and Charlotte Bunch started another publication called Quest.1 This transformation, while more artistic, also reinforced the emphasis on economics which they highlighted throughout the Furies’ periodicals. 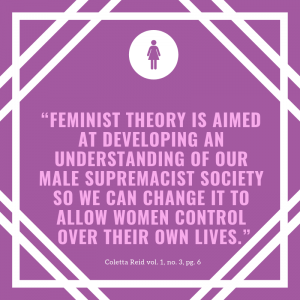 By creating production companies it initially appeared that they had ingrained their feminist projects into commercial and capitalistic forms, a tactic seemingly contrary to the anti-patriarchal establishment aspect of their ideology. Deceptively they managed to empower women economically, and disseminate feminist culture, which accomplished the original function and intent of the projects in the first place.  The economic model adhered to by these activists is explained in a Furies article titled “Building Feminist Institutions,” where Helaine Harris and Lee Schwing discuss extensively the idea of “creating institutions would not only create places where we could work for ourselves and other women, but they would afford a situation where there were concrete reasons to deal with class, race, and age.”2 Ultimately this became the message for other post-Furies projects as well; Seek financial security, and further the feminist consciousness through confronting possible privileges. These forms of activism are concentrated into a specific entity, so instead of being overwhelmed by several different projects and programs, they could constantly develop their own individual project.

With the intention remaining the same throughout these new projects, the stress of being encapsulated in the Furies did not dissuade them from the radical ideology of their sect of the movement, nor did it further radicalize them. Rather they maintained their views, especially their perspectives on class, lesbianism, and dismantling the patriarchy. For example, in the final issue of the Furies Charlotte Bunch insists that “Separatism from men is essential to the feminist struggle and will be for many years to come” demonstrating a resolve for the idea of separatism.3  They were not, however, so unyielding that adjustments could not be made as they sought to improve their ideology. This mission to enhance the movement remained among the reasons their style of activism changed.