Separatism, inseparable to the identity of the Furies Collective, is woven into their theories on patriarchy, class, lesbianism and remains a necessary mechanism of lesbian feminism. Articles throughout the periodicals reveal the Furies’ motivations for separatism as well as a desire for community. The periodicals identify two primary reasons motivating the Furies towards separatism. The first, a general feeling of being outcast from society, and the second, anxieties and issues within the Women’s Liberation Movement. These anxieties caused by being a minority in the movement, and the ideological disagreements between the dominant position and radicalism.

Such feelings of being outcast stemmed from the social norms of the time, demonstrated by this declaration by Furies writer Charlotte Bunch that “This society hates women who love women…” which articulates the antagonistic perceptions of lesbians in the mid and late twentieth century.1 Yet for some women the societal norms penetrated a personal level, as they were attacked by their family when they sought understanding, tolerance, or acceptance. This is shown in one of Helaine Harris stories with the following exchange between a mother and daughter:

“Heather, I just wanted to tell you one more thing. Don’t ever, ever bring any of your homosexual/lesbian friends into my home again.” “Don’t worry, Mother. I won’t even bring myself into your home again. Goodbye, sorry it didn’t work out.”2

Feelings of isolation and oppression from society stirred a need for community and belonging. 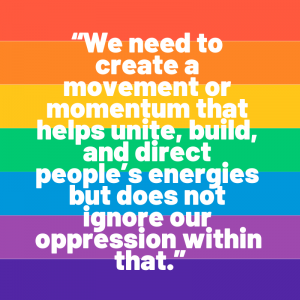 Within search to find a community, the women sought to end the oppression of their gender and sexuality. The Women’s Liberation Movement were not the progressive liberator the lesbians had hoped for. The movement’s leadership and concerns were overwhelmingly white, middle class, and straight. The Women’s Liberation Movement was plagued with homophobia, exhibited initially by the comments of Betty Friedan referring to lesbians as the “lavender menace” at a NOW meeting in 1969.3 Homophobia heightened the fear of coming out“…I had fallen in love with Joan and was scared shitless that I would be kicked out of Women’s Liberation if anyone found out.”4 Many also feared being ostracized and losing their community. The Furies also complained about the ways the Women’s Liberation Movement divided women along lines of race, age, sexuality, and class.  Charlotte Bunch claimed that “…the women’s movement was failing too many women. It was oppressive to lesbians, working-class women, non-white women (the most obvious and least understood), young women, older women, artists, leaders or individuals with initiative, followers who were manipulated, mothers, etc. ”5 Rita Mae Brown, Furies member, and writer, lodged a specific criticism in an article Leadership vs. Stardom saying “Stars give women the illusion of involvement; true leaders demand commitment.”6 She believed the Women’s Liberation Movement was not concentrated enough on actually ending the patriarchy.  The isolation the Furies felt emphasizes the necessity of intersectionality in feminism because their oppression was not being recognized as valid. Thus homophobia and oppression drove the women who were to become the Furies collective to consider alternatives to the Women’s Liberation Movement.

Such concerns and fears crafted a foundation of separatism driven by an immense desire for a new kind of community. The established isolated spaces intended for lesbians were problematic. As Furies’ writer Ginny Berson stated in an article on lesbian bars “Bars aren’t made so lesbians can have fun–they’re made so lesbians will buy drinks.”7 These so-called sacred safe spaces were hollow as they were not meeting the needs of the LGBTQ community. While the Furies used lesbian bars in their activism, that did not mean that these were always welcoming spaces, as gay bars had a history of exclusivity during the 1950s during the height of the Lavender Scare.8 The lack of permanent and complete spaces for lesbians emphasized the need for Furies and others to create their own.

The Furies believed that separatism was essential to their goal. Ultimately, they wanted to eliminate male supremacy and the communities thus forged were the pathway to this liberation. Ginny Berson articulated “We could have worked separately on our political development as individuals. But we decided to become a group because we felt that we would grow faster and develop better politics.”9 Clearly stated is the importance of the communal element in the developing and executing of feminism. Communities essentially provided a platform to overcome the societally constructed divides which the Women’s Liberation Movement conveniently perpetrated. “Creating institutions would not only create places where we could work for ourselves and other women, but they would afford a situation where there were concrete reasons to deal with class, race, and age.”10 Strengthening the community in ideology and relationships would instill the sense of solidarity, the Furies believed, could challenge the patriarchy which disenfranchised women and their power.

It is nearly ironic a separatist collective was established in Washington, D.C, located a mile away from the United States Capitol Building, as separatism is conventionally defined by isolation from the dominant culture. Yet their location did not negate their separatism, rather the Furies redefined conceptions of space. The history of marginalized people in the cities cannot be overlooked. The end of World War II and the Lavender Scare of the 1950s drove the LGBTQ community to coastal cities, primarily New York City and San Franciso. The urban setting also allows for simultaneous connection and ambiguity creating a liminality of the space.

Also, by the collective being based in Washington, D.C they are subverting male domination. They are physically declaring they do not want to be involved in a culture of oppression but they will not disappear and become another voice the government and men can ignore. Rather by remaining in the city, and continuing their activism, they are using their voice and their energy to challenge and, in their hopes, eliminate the patriarchy.

Unfortunately, despite their visions of community, exclusivity became part of the Furies definition of separatism, particularly excluding, men and straight women.11 In the rationale of the Furies, the exclusion of men was necessary for separation from men. Additionally, the damage caused by the anxieties and fear the women experienced in the Women’s Liberation Movement was reflected in the exclusion of heterosexual women from the Furies community. Exclusion often appeared as one aspect of a separatist group’s identity, and the Furies were no exception. Ironically, this very idea evolved toward the Furies disbandment. Charlotte Bunch succinctly expressed such a sentiment saying: “Our [the Furies] problems came not from our separatism per say, but the impression we gave that only lesbians could fight male supremacy, rather than that lesbian/feminist consciousness was crucial to the struggle.”12 The need for community was powerful and while it aided them in separatism, it also served to show to them that their goals could not be achieved by isolation.

For the Furies, separatism allowed them to execute their political goals, but it also created the opportunity for the Furies to have a community previously denied them by society, by their families, and by their contemporary social liberation movements. Marginalized peoples, such as the Furies, often find themselves forced by similar agents to rely upon each other and construct groups, networks, and organizations to defend themselves and seek some semblance of solace.

8 Genny Beemyn, “Chapter 3: Race, Class, Gender, and the Social Landscape of Capital’s Gay
Communities During and after World War II,” from Queer Capital: A History of Gay Life in Washington, (New York: Taylor and Francis, 2017)