From Conception to Disbandment 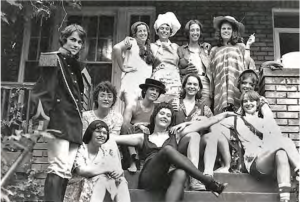 The history of the Furies is brief, but the power of their movement while it existed is evident when one reads the history of this group. As in every group, the exact details of the inner-workings collectives are usually left up to the imagination of outsiders. However, the Furies have made it a point in their periodicals to write about their group in order to provide readers with an insight of collective life.

The Furies periodical initially provides unique insight into the creation of the group itself. Ginny Berson makes an explicit statement about the demographics of the Furies collective:

We are a collective of twelve Lesbians living and working in Washington D.C. We are rural and urban; from the Southwest, Midwest, South, and Northeast. Our ages range from 18-28. We are high school dropouts and Ph.D. candidates. We are lower-class, middle and upper-middle class. We are white. Some of us have been Lesbians for twelve years, others for ten months. We are committed to ending all oppressions by attacking their roots— male supremacy.1

Here, Berson is completely transparent about the composition of the Furies. By laying out the demographics of this group, she shows that the Furies have diverse understandings of their activism—they are well-off and poor, middle- and working-class, new to lesbianism and experienced, and varying in levels of education. There is also an admission to the Furies being a group of younger, white women, which also shows their audience the limits of their analyses. The Furies put themselves in a position where they have the potential to tell many stories because their writers have a range of different experiences  and perspectives that assist them in developing a cohesive ideology.

After explicating the dynamics of their group based on the variety of demographics it encompasses, the next look into the collective’s life focuses on the internal struggles and “growing pains” that the collective faced. In “Emotionalism: Downward Spiral,” Deevey and Reid allude to some of the issues that the Furies, among many collectives, faced: “Lacking a clear political direction, our lives became dominated by our personal relations with each other… Conflicts multiplied. Everyone felt paranoid and ‘emotionally strung out.’”2 From this statement, one can see that inherent struggles that come with the formation of a tight group of people who live, work, and depend upon one another. Therefore, having group cohesion is essential to group survival. All participants must have cohesive ideologies and goals; they also must place less focus on the “emotionalism” that often dictates personal relationships and instead focus on those cohesive goals and politics.3

The Furies often credited living as a group as the most effective way in which they developed their political ideology.4 However, the collective did not last. Rather than leaving their dissolvement a mystery to their readers, the Furies devoted two full articles to discuss the reasons why their group, like many others, officially broke up. “After a year, we felt that our situation changed… so we in the Furies have disbanded as a tight group in order to work with new people and on different projects,” Berson states in one of the articles.5 Reid also writes that despite an “official” group disbandment, that women would continue to live together, pool their resources, work on projects, participate in study groups, and even practice karate together.6 The Furies survived as a group as long as they felt that the group served a purpose in forwarding their lesbian-feminist ideology and projects. One can infer that some of the interpersonal relationships in the group, as well as the reality of living and working alongside such a small, intimate group of people, may have played a role in the Furies’ decision to formally disband, but one may turn back to the core issue Deevey and Reid forward:group cohesion. A separatist group such as the Furies must have a cohesive ideology and goals in order to survive. While they certainly did possess that cohesive ideology, their personal goals and desires to work on other projects ultimately led to their dissolvement.

In May of 1963, The Furies periodical also met its end. Due to a lack of staff that was able to commit the time and effort into writing, publishing, and distributing the magazine, the Furies chose to end the publication.7 “It was clear that the paper was not the staff’s major priority…,” Schwing and Harris wrote, “Everyone seemed to be spreading themselves thin.”8 Similar to the disbandment of the Furies as a collective, the end of The Furies publication was due to a lack of cohesion in the group and a desire to work on other projects. Although the periodical, like the collective, was relatively short-lived, it would be unfair to say that its words were not impactful. In the span of a year and a half, the Furies successfully argued their specific ideologies, criticized societal institutions, and created a space for lesbian voices in print.