The Furies periodicals are a serial publication of work, written primarily by Furies members, that ran from January 1972 to June 1973. The life of the periodical closely mirrored the life of the collective itself, which survived from spring of 1971 to summer of 1972. The periodicals themselves functioned as the collective’s primary way to release a manifesto of their ideologies, which includes a body of work that reflects the Furies’ lesbian-feminist ideologies, class ideologies, popular culture, and creative works. They also served as a way for the Furies to participate in a dialogue with other lesbian-feminist groups. By creating the periodicals, the Furies were able to hone their personal and political ideologies. Through evaluating their text, it is possible to glean a greater understanding of their collective and how it functioned as a separatist group. 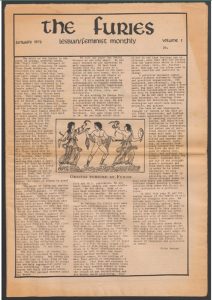 “The Furies: Lesbian/Feminist Monthly (v.1),” by The Furies Collective is licensed under CC BY-NC-ND 4.0