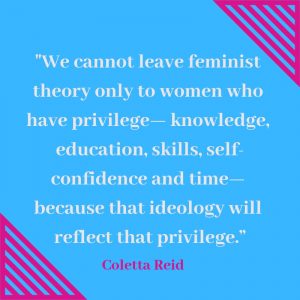 Class ideology also played a large role in the work of the Furies. In many progressive movements during this time, movements prioritized the rights of middle-class people over that of lower-class people, just as they did in everyday life. Lesbian-feminists were not immune to this lack of class-consciousness. For example, Sharon Deevey wrote, “About a year ago I joined a Lesbian collective that lived together one painful week and broke up, largely because several of us had not dealt with our class privilege.”1 In their periodicals, the Furies explore class consciousness, privilege, and the importance of working class inclusion in lesbian-feminist movements.

For the Furies, class is a real and concrete aspect of  American society. Class gives wealthy groups privileges, while it also works as a tool of the privileged for othering economically disadvantaged groups. Part of the reason why class is such an important aspect in the Furies collective is that, for them, capitalism is an institution of male-dominated society. Classism is also a device used to pit women against each-other rather than against men by “[keeping] women down and divided through middle class women’s behavior towards lower class women.”2 In order to work together cohesively and end oppression, the Furies believed that women needed to come together in spite of class differences. In order to do so, middle-class women needed to adjust their negative behavior towards working-class women.

I never really had to deal with my middle classness until I moved into another collective where there were a number of lower class women with fairly high class consciousness. From my point of view, being revolutionary meant sharing everything you had, and living without whatever you didn’t need (among other things). From their point of view it meant (among other things) giving up class privilege.3

Here, Berson reveals how a lack of class consciousness affected her understanding of her working-class peers. While she had the privilege of giving up her material possessions as a middle-class person who had never truly experienced poverty, lower class women expected her to give up her higher social position. Another Furies member, who grew up poor but managed to elevate her social position by attending university, reflected that it is important to question one’s own “middle-class attitudes and ways of behaving” rather than dismissing class as a social institution of no real consequence.4 Through class consciousness, collectives can better interact within their own group and outside of their group; they can also understand the value of inclusion of women from both working- and middle-classes.

The Furies did work to show the value of class consciousness and to include the voices of working-class women in the narrative of lesbian-feminists. The importance of having cohesive political ideology characterizes the writings of the Furies; they do acknowledge, though, that ideology is empty when it is constructed only by people of privilege. “We cannot leave feminist theory only to women who have privilege—knowledge, education, skills, self-confidence and time—because that ideology will reflect that privilege,” Coletta Reid writes.5 The significance of Reid’s words is that working-class women and women of color, groups that often intersect, were silenced in the Women’s Liberation Movement, which was dominated by middle-class, white, straight women. Although the Furies were all white women and only some were working-class, they acknowledge the exclusion and othering that these women faced in political movements.

In addition to the importance of their voices in movements, the Furies also seem to value working class women in their initiative. Woodul says here that “a lower-class woman is not used to expecting a big pay-off every time she takes a risk… Risks have always been a part of her survival.”6 She acknowledges that middle class women, in essence, have secured their class positions by not taking risks. However, a working class woman does not have the luxury of applying a “wait and see” approach to life; her survival is dependent upon risk-taking. In the frame of radical political movements, this trait is ideal because activists must take risk in order to enact social change.

Rather than simply theorizing class issues, the Furies attempted to navigate class differences within their group in a way that would help their economically disadvantaged members. In order to practically apply the class consciousness that members had worked to understand, the group decided that they would collect fees from members without forcing working class members to work longer hours in order to compensate. Coletta Reid states, “We finally decided on a percentage system which varied from 20% of one’s monthly salary or an $80 minimum to 50% or more of other’s salaries. We decided together on the particular percentage that each of us would pay—based on class background, former heterosexual privilege, education, and age.”7 By implementing this flexible payment plan, the Furies worked to become a group that sympathized with class struggles. By accepting the reality of class differences and implementing a system of equity amongst members, the collective was able to pour its energy into The Furies publications