A New Age of Tourism

By the end of the 1961 tourist season it was clear that McDonald Territory was no more. But that did not mean that traditions, identities, and excitement born during the spring of 1961 had passed as well. The plight and brave resistance of the community in Noel had grabbed the nation’s attention and people would remember the characters and actions of the movement for years to come, a fact that Noel actively supported.

Throughout the summer of 1961 the McDonald Territory Border Guards were still roving the county, looking for “unregistered” visitors to harass and gift with visas for continued safe passage.¹ Visitors loved these characters and the shows and interactions that they performed around the county. The reputation of the Border Patrol grew in Missouri when they were invited to participate in the 1961 reenactment of the Battle of Wilson’s Creek on August 10. They fought on the side of the “Rebels” and, after the “Rebel Commander” was wounded  in battle, he was presented with the McDonald Territorial Purple Heart by Dan Harmon, the Border Guard Commander.² 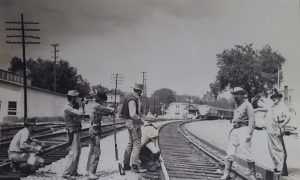 McDonald Territory Border Guards wait to stop and board a train near Noel to pass out stamps and visas and put on a show for passengers, circa 1965. Courtesy of McDonald County Historical Society.

The success and fame of the Border Guards was not the only thing for Noel to be proud of during the months following Secession. As December of 1961 rolled around Noel prepared itself to receive one million pieces of mail from all over the world, already stamping incoming mail with its famous “Christmas City” stamps and an additional “McDonald Territory” stamp. By December 4 the post office was receiving mail from countries that it never had before.³ However, Noel had its greatest success in August 1963 when the Kansas City Southern Railroad (the successor tot he Kansas City, Pittsburg, & Gulf Railroad) began to allow the Border Guards to board the train between Noel and Siloam Springs, Arkansas to pass out McDonald Territory stamps and visas and to welcome passengers to McDonald Territory. It was a very popular stunt and people would ride the train to Noel to experience it, spend the day in the town, and ride the train back to their point of origin.4

When April 1962 rolled around, the previous citizens of McDonald Territory surely roared in triumph. Noel was back on the state-sponsored tourist map. The 1962 tourist map, titled “For Your Holiday – Missouri,” was more akin to a booklet of maps, containing forty pages of information of tourist destinations and extensively covered potential points of interest in McDonald County.5 The Division of Commerce and Industrial Development hoped that the year’s advertising attempts would push Missouri past its record $632 million in tourist revenue and 14 million visitors.6 Things were looking up for the world of Missouri tourism and McDonald County was undoubtedly going to be a part of the increasing profits.

Overall, the years following the secession were incredibly vibrant for Noel and the surrounding area. The residents had embraced the Ozark mythology and continued to keep the region’s natural resources healthy as the flow tourists into the Noel-Elk River Playground via Joplin and Route 66 continued unabated. According to Mrs. Stevens, the wife of Jim Stevens,

“McDonald County was electric with tourist activities. There were old car parades, fashion shows (1800 style), fishing derbys, mock battles with mock enemies, boating parties, fish fries, entertainment banquets, and reunions. Special entertainment took place at the various resorts, beaches, and at Shadow Lake. You name it, Noel was eager to give the tourists what they wanted…”7 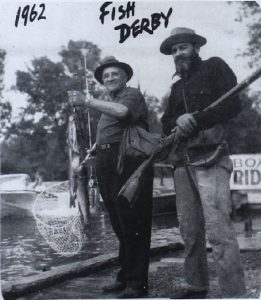 The people of Noel knew and lived the tourist experience. From the moment that they declared secession from the State of Missouri, they were giving lookers-on exactly what they wanted to see from a rural Ozarkian town. But the movement wasn’t done without a level of seriousness. Although most Noel residents were not actively seeking secession, they were looking for a way to voice their concerns to the state government. They had felt neglected for years as they sought to develop an incredibly vital industry that their neighbors were prospering from with state aid. And, when the state seemed, in eyes of Noel residents, to be actively trying to undermine the McDonald County tourist industry, the citizens of Noel, who relied most heavily on it, took the action that they knew would save the industry and have their voices heard. They declared secession.

Many residents in McDonald County today, and many in 1962, viewed the secession as a hoax and as a way to obtain free advertising. While the second belief is certainly true, the first is fundamentally flawed. It is flawed because the movement was never about secession, it was about saving the tourist economy of the Noel-Elk River Playground, which is why it saw the support of Jasper County, which had no intention of seeing McDonald County leave Missouri. And, as can be seen by the Border Patrol stopping a train years after the secession ended, the McDonald County Secession movement was an incredible success.

Next: About the Project