Missouri Governor John Dalton’s first response to the McDonald County secession was to apologize and inform them that he was not responsible for the Family Vacationland map incident:

“I am extremely sorry about the omission of Pineville and Noel, but this office had nothing to do with preparing these maps and I would suggest you contact the Chief Engineer of the State Highway Department.”1 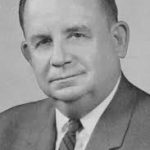 Missouri Governor John Dalton. Courtesy of the Official Manual of the State of Missouri 1963-1964.

Though, as John Dalton realized the McDonald Territory was more serious than he originally thought, he began to take action. He sent out his administrative assistant, Robert Welborn to McDonald County as a diplomat in hopes that he would “be able to iron out the difficulties.”2

So while Governor John Dalton probably had the ability to prevent the highway changes and familyland crisis, he was not the one behind these events and saw how inappropriately the state had been treating McDonald County. He assured the citizens that the same mistake would not happen again and they would be put back on the map.

It seems that the Missouri Governor eventually took the situation seriously and saw the Family Vacationland map incident as playing a vital role in leading them all to that point:

We realize it was a serious oversight and we will do anything we can to remedy it. That is one of the most beautiful countries in the world and we realize that millions of tourists will be attracted to it.”3

Next: A New Age of Tourism