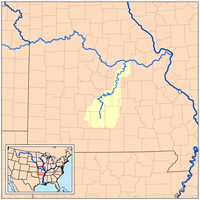 The Gasconade River, where St. Louis outdoorsmen would seek the “Ozarkian” experience during the late-nineteenth century.

The first tourist destination in the Ozarks was the Gasconade River. The Gasconade River is further north than the modern day heart of Ozark tourism, Branson and the White River system, but saw itself become the first center of Ozark tourism due to its relative close proximity to St. Louis and the ease of travel that this provided. By the late nineteenth century, the river became a popular retreat for the St. Louis male middle class, which had become interested in the leisurely float trips and high quality fishing destinations that it provided. It was also during this time period that the “idealized and mythologized rustic Ozarkian life” began to take form in an effort to pull in more interest to the region.¹ Throughout the coming decades, the entire Ozarks region, with its ample game, fishing holes, breath-taking caves, and rivers would gradually come to serve as an escape from urbanism, a role that persists today.² 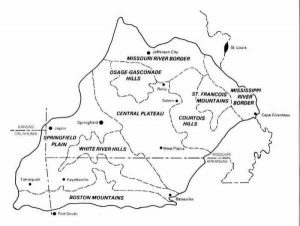 The geographical subregions of the Ozarks. Throughout the twentieth century, the center of tourism would shift from the Central Plateau to the White River Hills. Springfield and Joplin were in a good position to benefit from the new flow of tourism. Courtesy of OzarksWatch.

The early twentieth century saw the continued development of the “rustic” perception of the Ozarks, but the demographics of urban tourists began to change. The region had become opened up by rail lines as developers sought to build their lines through scenic territory and begin capitalizing on the growing tourist traffic flowing through the area. This increased access began to shift tourist interest deeper into the Ozark hills and made the trips away from urban centers more available to whole families rather than just men. This began to shift the tourist economy away from fishing destinations to tourist resorts that were available to this new railroad traffic.³

Eventually the mobility of the touring families increased. Beginning in the 1910s middle class families were seeking out the Ozarks experience via automobile, now unrestricted by rail lines.4 Increasingly, every secluded Ozarkian hamlet would be pulled into the mythology of Ozarkian rusticism and outdoorsmanship. The volume of tourism in the Ozarks region swelled with the establishment of Route 66 and the Ozark Trail Association in the 1920s and saw a second swell during the middle of the century with the establishment of the Missouri state highway system.5 In order to preserve the natural beauty of the Ozarks and its wildlife resources, integral parts of the region’s allure, the state of Missouri began establishing state parks and other state-funded regional development and conservation programs. 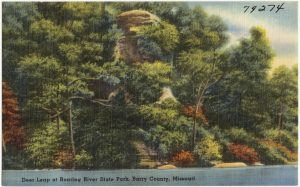 A postcard depicting the Roaring River, circa 1930-1945. Courtesy of Digital Commonwealth.

The first and perhaps most significant of these was the Roaring River State Park in Barry County, just east of McDonald County. The Roaring River State Park was established in 1928 and developed throughout the 1930s with federal and state aid. It became, and continues to be, a very popular camping location and, more famously, a trout fishing destination that pulls in sportsmen and outdoorsmen from across the nation.6 The State of Missouri gradually expanded its park and conservation programs throughout the century with good results. By 1960, tourism had become Missouri’s third largest industry, seeing more than 15,000,000 tourists visit the state that year.7 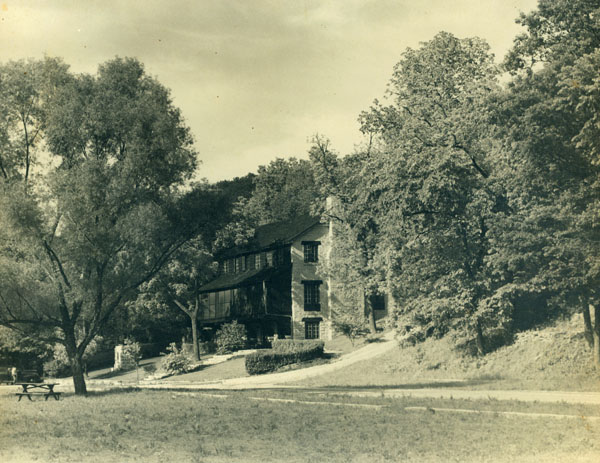 The Roaring River Lodge, built by the Civilian Conservation Corps, circa 1940. Courtesy of the Barry County Museum.

All the while, cities and towns along the expanding tourist routes came to rely on the increasing amount of outside money coming into the region as they continued to cultivate the region’s natural beauty and “ethnic” character. McDonald County was no exception.

Next: Tourism and McDonald County