“We live off tourists in the summer and off each other in the winter.”- A McDonald County Saying, circa 1960¹

The Noel-Elk River Playground was at the heart of the tourist industry in McDonald County. The natural beauty of the region had attracted outsiders since the late nineteenth century, much like the Gasconade River, leading to a history of reliance on tourism in the Playground since the county’s early years. Noel, unsurprisingly, was the focus of the tourist traffic to the county, both because of its local beauty and its position on the Elk River, but also because of historical precedent. 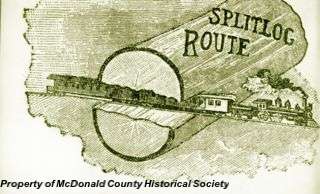 An advertisement for the proposed Splitlog Route. Courtesy of the McDonald Historical Society.

Noel was founded in 1891 by postmaster Thomas Marshall, who moved his store and post office a mile north from its original location.² The relocation was done to take advantage of the newly constructed Kansas City, Pittsburg & Gulf Railroad, which had been rerouted from its original destination to Splitlog, McDonald County (a failed mining operation that had spurred the construction of a railroad through McDonald County in the first place)and had been expanded to connect Kansas City to Port Arthur, Texas.³ It is commonly said in McDonald County that the railroad decided to route through Noel rather than Pineville, the county seat, because of the beauty of the town. While it instead seems that Noel founded itself on the railroad for the commercial benefits, there is little doubt that both the KCP & G Railroad and Noel benefited greatly from the natural beauty of the region and worked heavily to establish the Noel-Elk River Playground. Noel worked to build its image throughout the early twentieth century as a major resort destination and commercial center in the Ozarks. It was during the 1930s that the citizens of Noel began to earnestly advertise their town. Due to its name, Noel picked up the nickname “Christmas City” and it became popular to postmark Christmas cards to the town to get the postmark Noel on the envelope. This fad, and subsequently Noel, gained national attention in the 1940s when Kate Smith, the “First Lady of Radio,” covered the practice.4 The plan to capitalize on the name was conceived by Noel postmaster E. T. Rousselt and by the 1947 Christmas season about 400,000 pieces of mail were processed by the Noel post office.5 And, as the name of the town spread, interest concerning McDonald County grew. 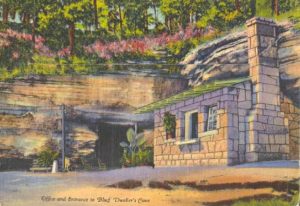 The office and entrance to Bluff Dweller’s Cave, near Noel, circa 1960. Courtesy of the McDonald County Historical Society.

The Noel-Elk River Playground had never been difficult to reach due to the rail line, but as the forties and fifties rolled around, the entire playground opened up. While the rail line kept a constant flow of tourists passing through the town the playground grew in popularity as the federal and state highway systems gradually improved and tourists could easily detour off of Route 66 at Joplin and travel down U.S. 71 to visit the area. There was a lot for a family to do while passing through. The Elk River made for a mild floating trip with good fishing and it was common for floaters to put in at Anderson or Lanagan and take out near Noel.6 There were also several show caves, the Missouri-Arkansas-Oklahoma border marker in Southwest City, and the famous Elk River Bluffs for tourists to visit and experience while in the area.7 However, more than just sites and novel attractions brought tourists to the Playground.

The area’s natural beauty brought in thousands of urban dwellers to relish the wonder of nature each year, a fact that the county actively worked to facilitate. The 1938 Apple Blossom Pilgrimage to the county was heavily advertised, as it had been for years, and the county set up “marked routes [to designate] scenic tours along highways bordering the thousands of acres of flowering orchards.” And, because of their close connection, information and maps detailing these scenic routes were made available at the Ozark Playground Association in Joplin.8 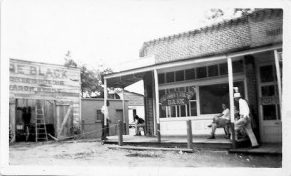 The filming of Jesse James around Pineville. People crowded the city for the chance to glimpse their favorite actors. Courtesy of Pineville City Hall.

Another boon for McDonald County was the filming of the 1939 film Jesse James. Filming too place for about a month and a half from August to October in the county and pulled in a larger wave of tourists than usual for the late summer. This brought about a new wave of souvenirs being sold by local shops and, by the end of filming in the county, had brought about 200,000 people to the area who spent $500,000. Twentieth Century Fox spent at least $150,000 in the county during the filming.9

The decades of tourist traffic led to the establishment of several campgrounds and resorts, where families could experience the outdoors while staying close to the Elk River and highway. These included Bosky Dell (later Lee’s Court), Camp Follis, Camp Tildon, Indian Camp Springs, PLA-DAZ, and Riverside Inn.10 However, the most famous of these resorts were Ginger Blue and Shadow Lake. These were the two upscale resorts in the county, both near Noel. 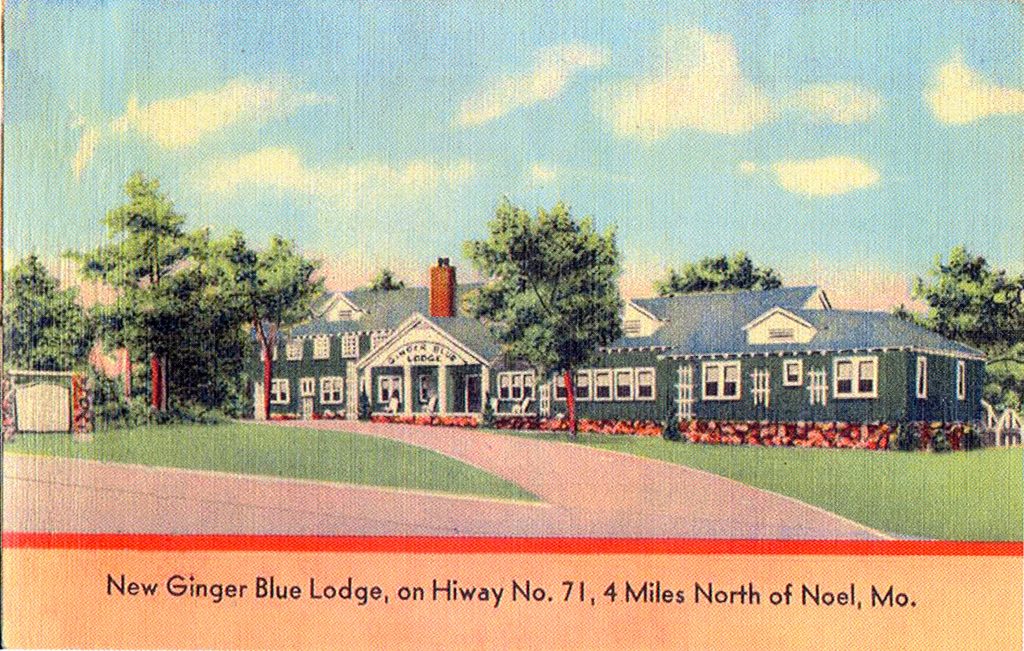 Shadow lake is a man-made lake, a result of the damning of the Elk River as it runs through Noel. It was a major attraction to Noel, but also represented a major grievance that McDonald County held against the state. As discussed in “The Ozark Playgrounds,” the State of Missouri began funding public projects, including state parks and recreational areas, including stocking rivers with fish, maintaining dams, and upkeeping conservation areas. This funding and work had greatly benefited regions such as Barry County, home of Roaring River State Park, by keeping the region appealing to tourists. Unfortunately for McDonald County, there were no state-owned or funded parks or facilities in the county until 1992.11 This meant that upkeep of the Elk River, a major source of tourism for the county, had to be handled by private citizens. This led to the creation of the Elk River Association on March 26, 1961, which ensured that the four dams in the county, including the Noel Dam, were functioning properly and not threatening the fish populations.12 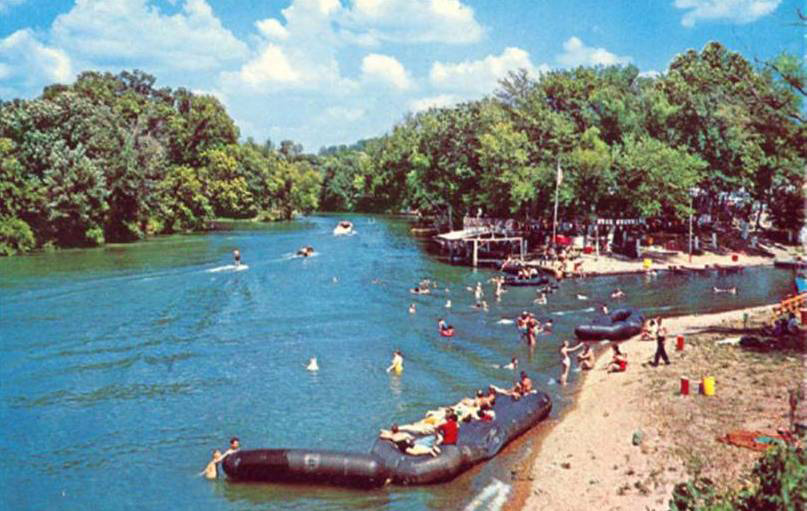 Visitors swimming in the Elk River near Noel, presumably in Shadow Lake, circa 1960. Courtesy of the McDonald County Historical Society

This effort of private citizens to maintain recreation areas led some McDonald County residents to question the role of the state in the county. Z. L. McGowan, the president of the Noel Chamber of Commerce, stated that because $14,744 collected by McDonald County for hunting and fishing licenses went to the state in 1960 alone that the state should help maintain recreational areas within the county. Another complaint within the county was that the Elk River had not been stocked with fish since about 1955.13 With growing frustration the citizens of McDonald County preserved their natural assets without state support as they saw their neighboring counties become major tourist destinations with the aid of the state. Already perceiving themselves as marginalized after years of being ignored, the Missouri Highway Department would reaffirm this feeling in the fall of 1960.

Next: The “Family Vacationland” Crisis

3. Gayle Foster and Karen Utter-Jennings, A Look at the Past: A Pictorial Journey Through McDonald County Missouri (Pineville, MO: McDonald County Historical Society, 2013), 7-8.

10. Arthur Paul Moser, “A Directory of Towns, Villages, and Hamlets Past and Present of McDonald County, Missouri,” Springfield-Greene County Library, 3-16.