The Formation of McDonald Territory

The Missouri Highway Department had apologized and promised to fix the issue with next year’s map, but the people of the Noel-Elk River Playground wanted immediate action to save their 1961 tourist season.¹ On Monday, April 10, after losing faith in the Missouri state government to rectify or compensate for the potential damage done to the McDonald County economy, citizens of Noel gathered together and announced their intent to secede from the State of Missouri and “The Tyranny of Omission.”

A provisional government was called together and officials of the new territory were elected. Z. L. McGowan, the president of the Noel Chamber of Commerce, was elected president and immediately set about having signs erected on highways welcoming travelers to McDonald Territory. ² And, despite objections from Governor John M. Dalton, Robert Yocum; the attorney general of McDonald Territory, set about compiling the paperwork necessary to officially secede.³ A Noel printer was also commissioned to begin producing territory passports and stamps while mayors of other McDonald County towns were invited to participate in the new government.4 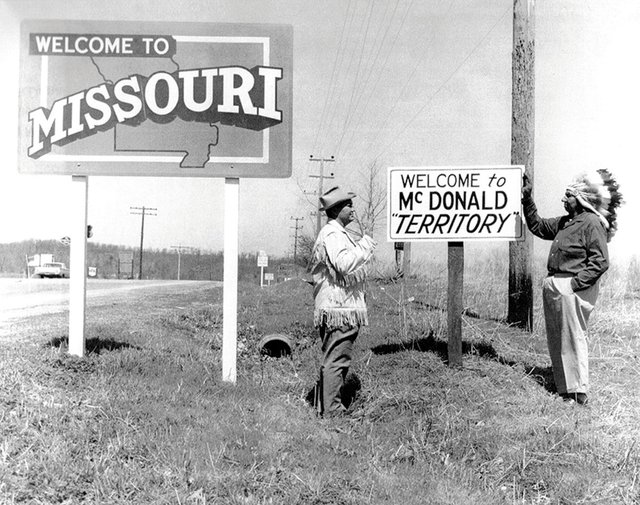 McDonald Territory President Z. L. McGowan and Chief Saugee greet each other at the territory border. Courtesy of the McDonald County Historical Society.

At the same meeting, the provisional government invited adjoining counties in Arkansas and Oklahoma to united with McDonald County to form the fifty-first state of the Union, recognized an invitation from Arkansas Governor Orval Faubus’ invitation to join the State of Arkansas as well as the invitation of Cherokee Chief Henry Saugee to transform McDonald County into “Indian Territory,” both of which came in the day before when secession was announced.5

In the meantime, Tuesday saw McDonald County representative Boyd Walker was introducing  a resolution to the General Assembly in Jefferson City to withdraw the Family Vacationland Maps and reissue “complete” ones, an action that the people of McDonald County doubted would gain ground. This attitude was reinforced when the resolution was referred to the House Committee on Miscellaneous Affairs.6

The people of McDonald Territory didn’t seem to mind though. Noel was a flurry of activity as territorial signs were out up, printing machines rolled out reams of visas and stamps, Ralph Pogue; the publisher of the McDonald County Press, released entertaining and inflammatory stories, and a McDonald County militia was quickly organized.7 And, most importantly, reporters were flooding into the tiny town from across the nation.

Next: The McDonald Territory Border Guard