Following the Battle of Noel it seemed like McDonald Territory couldn’t  possibly do anything else to pull in visitors that April. But the little tourist town had a final hurrah to make sure it had a final surge of publicity before the summer tourist season fully rolled around. 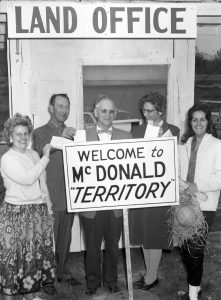 The fours winners pose outside the McDonald Territory Land Office, where they purchased their land claims. Courtesy of the McDonald County Historical Society.

The territory organized a land rush for Sunday, April 30. The preceding weeks saw substantial advertising for it in the territory, an acre of land each to the four winners who found a deed hidden within the land being given away. Only outsiders were allowed to participate in the activity, specifically those that had official visas and had registered at the land office.¹ Of course, the people of McDonald County couldn’t just host a simple land rush. As potential land owners scoured the four acres of land, citizens of Noel dressed up as “marauding Indians” harassed them, only to be driven off by the brave McDonald Territory Border Guards.²

The stunt proved to be a success, with about 1,000 people visiting Noel to watch the rush happen and 100 people hoping to stake a claim.³ People loved the “Ozarkian” experience that the rebellious and roughshod citizens of Noel gave them. After decades of appealing to the image of the Ozarks developed by the hosts of the Gasconade River resorts, the people of Noel were experts at this special brand of showmanship. The Noel Land Rush was perhaps the pinnacle of this during the life of McDonald Territory, but it would certainly not be the last within the Noel-Elk River Playground.

Next: The Secession Loses Steam