By 1960 McDonald County had secured itself as major tourist destination in the Ozarks, with its heart centered around Noel. Because Noel was served by U.S. 71 it was part of a major travel artery that ran across the United States from the U.S.-Canadian border in Minnesota straight through to Kansas City and on to Baton Rouge, Louisiana. In addition to this, U.S. 71 connected Noel directly to Joplin, Missouri and, consequently, to U.S. 66, allowing Noel to act as a vibrant detour for those interested in the Ozarks experience. This connection to the national highways and the vital tourist flow that it brought was suddenly and unexpectedly severed in early August, 1960.

Without any warning to the residents, shop keepers, and resort owners of McDonald County U.S. 71 was rerouted from Noel to Pineville through Anderson, where it continues to run today. The road that ran from Anderson to Noel was now designated Missouri State Highway 75. The frustration that McDonald County residents who relied on the tourist industry was only increased by the fact that this change occurred during a high point of the tourist season and had still to be placed on state and federal maps when it occurred. This led to major confusion amongst tourists who thought they were on U.S. 71 heading to Noel, but found themselves to instead be on U.S. 71 heading to Pineville or State Highway 75.¹ This led to an immediate decline in business across the county. Additionally, thousands of dollars worth of souvenirs, advertising,  road signs suddenly became worthless.² 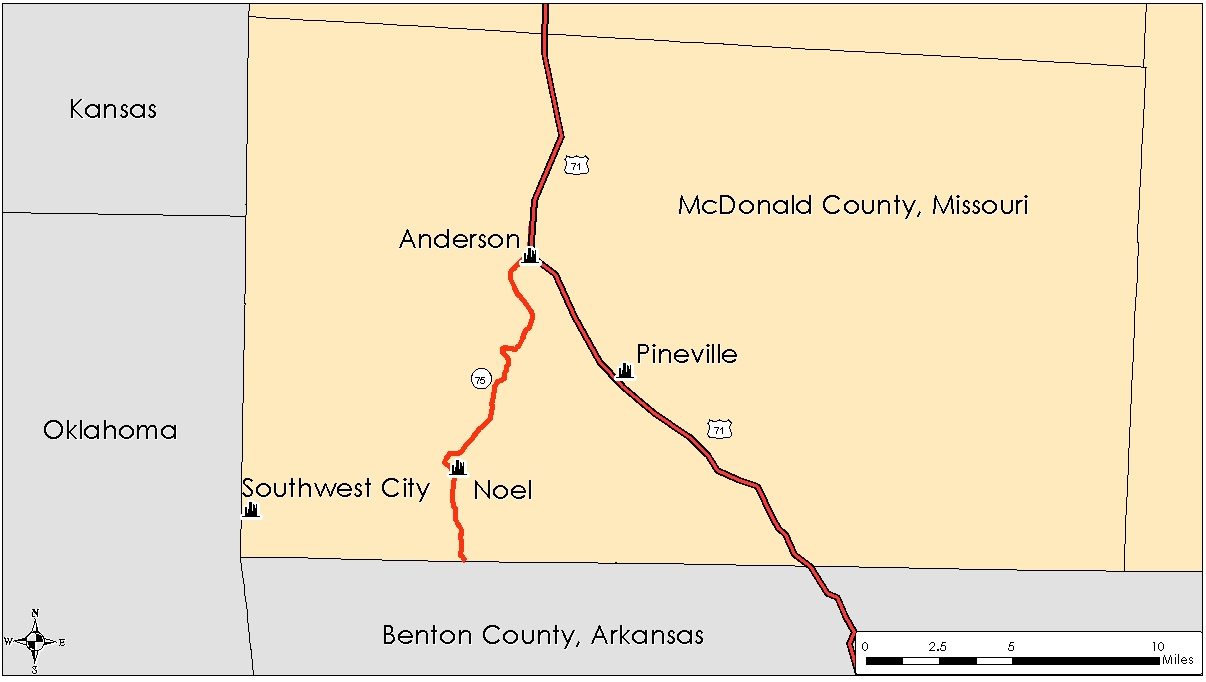 A map showing the highway changes that took place in McDonald County in early August, 1960. The previous southern half of U.S. 71 was changed to Missouri 75.

The remainder of the tourist season proved to be weak and served as a bitter piece of evidence that policy makers in Jefferson City had no concern for the well-being of the county. And, as if in an attempt to reinforce this notion within the minds of McDonald County residents, the Missouri Highway Department redesignated State Highway 75 to State Highway 59. Still, McDonald County accepted the change and the residents surrounding Noel made peace with the fact that they were now on a state highway. As the spring of 1961 rolled around resort owners and others involved in the tourist industry readied themselves for a new tourist season and to make up for the losses of last August. Little did they know that even bigger changes were being put into place in Jefferson City.

Next: The 1961 “Family Vacationland” Map