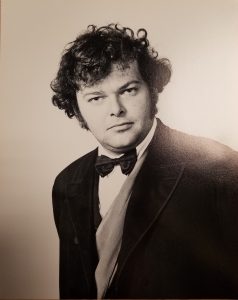 Elected Governor at 25 years old, a young whippersnapper named Neal Gamm poised as the head of a rag-tag group of activists who would come to capture the attention of the nation. Uniquely qualified to perform the duties of his most illustrious office, Gamm took center stage and demanded the attention of political elites who were inclined to look down on his home of western Illinois. Governor Neal Gamm’s humble beginnings in America’s most mismanaged prairie may not have hinted at his future ascendancy nor his natural political acumen, but they did prepare him for the quite literal rough roads ahead.

The Vietnam veteran returned home from the war in 1969, four years before his rise to power, and attended Western Illinois University. Through his study of the theatrical arts, Gamm learned how to lead, inspire, and entertain. He became the self-appointed Governor of Forgotonia in September of 1973 and faithfully served his state until his term ended in November. He is fondly remembered for his love of Western Illinois and his dedication to the betterment of his homeland. He returned home to retire in Ipava, Illinois for his last few years. He died in 2012 at the age of 65, fondly remembered.