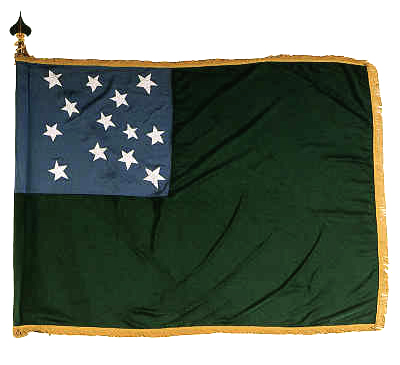 Caption: The flag of the Vermont Republic. The flag was colored green after the Green Mountain Boys and it held 13 stars because of its continued hope to join the American colonies. (Wikipedia commons)

The New Hampshire Land Grants officially become The New Connecticut Republic and later the Vermont Republic in 1777. A polity independent of both the British Empire and the 13 Colonies, it lasted until 1791 when it became the 14th state. This section details the course the small state tread as an official neutral party to the War of Independence that had its own clashes with the British and their Indian allies, but almost rejoined the Empire had not the events of the Revolution intervened.

Next Page: Vermont Declaration of Independence