Over the fifty years preceding secession, several attempts were made to reform the Virginia Constitution in order to redress the unequal representation of the West. The first was a convention held at Staunton in 1816, called to “reform defects in the constitution of the state.” This convention was called due to appeals from the people of eastern Virginia. One such appeal stated that “the government of the commonwealth is actually in the hands of a minority… inhabiting a particular section of the state. Forty-nine counties, adjacent to each other in the eastern and southern sections of the state… have a majority of the whole number of representatives in the most numerous branch of the legislature.” The majority of the members of the Staunton Convention responded favorably to amending the Constitution, but the Virginia Legislature declined to carry the measure any further. 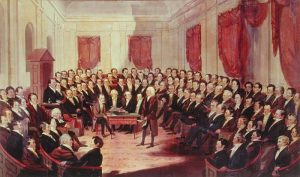 Western Virginians made a second attempt to equalize representation during the Constitutional Convention of 1829-30. They wanted representation in the House of Delegates to be based on the white population of the state, as well a full white male suffrage. As one Western Virginian put it “I do not think there are 50 men in this district that would wish to have a Constitution submitted to them based in any part upon slaves- I believe the people would be satisfied providing you could do no better to have the Lower House based on white population…” The reforms were defeated by eastern Virginian conservatives. While the new Constitution passed overwhelmingly elsewhere in the state, it was defeated 8,365 to 1,383 in the West.

Up Next: The Reform Constitution and Virginia’s secession from the Union