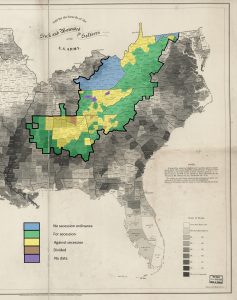 According to the map on the left, the northwestern counties in Virginia, represented in yellow, were the only ones that voted against secession from the Union. How then did many of the Appalachian counties in green become part of West Virginia?

During the brief period of time in which he supported the creation of the state, Senator John S. Carlile argued that the thirty-eight counties proposed to become part of West Virginia were divided from the rest of Virginia by virtue of being Appalachian. He explained that “the counties I have designated have no facilities, either of land or water, for any commercial or business intercourse with the rest of the State.” He believed they had an interest in becoming a part of the new state due to their lack of infrastructure and their more logical connections to Maryland, Ohio, Pennsylvania and Kentucky.

Shortly following the creation of West Virginia, a dispute between the two states broke out over where the border should fall. Of course, each state wanted the border to favor itself respectively. The part of the border that was in question falls between Loudoun County, Virginia and Jefferson County, West Virginia. It is roughly fifteen miles long.

Because of the conscious social division between West Virginia and Virginia, this boundary dispute lasted up until 1991 when both states allocated funds for a boundary commission.

Up Next: Who pays the Reparations?