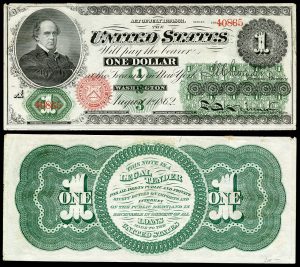 $1 bill, front and back, first issued in 1862. Godot13, National Museum of American History.

After the Civil War, the Southern States were required to pay reparations. These were sums of money that went to the United States government for the damage that was caused during the Civil War. This money was then used towards public works projects to rebuild the damage from the war.

By 1915, when payments were not being made to Virginia or the United States, the Supreme Court became involved in the matter. They decided that West Virginia owed $12,393,929.50 to the state of Virginia. These were eventually paid off by 1939.

These reparations are just another example of the rift between Virginia and West Virginia, that lasted well into the twentieth century. It goes to show the amount of anger and resentment not forgotten between the two, especially in the case of West Virginia.

Up Next: A Change in Congress