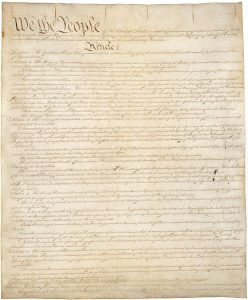 The Constitution of the United States. Constitutional Convention, National Archives and Records Administration.

Article IV., Section 3. of the United States Constitution states that “no new State shall be formed or erected within the Jurisdiction of any other State; nor any State be formed by the Junction of two or more States, or Parts of States, without the Consent of the Legislatures of the States concerned as well as of the Congress.” In order to legally secede from the Virginia, the new state would have to obtain the permission of the legislature of Virginia.

The Confederate government of the state was unlikely to allow the formation of a state under its territory which would then ally with the Union. To remain within the law, those opposed to Virginia’s secession from the Union created what came to be known as the “restored government of Virginia.” This loyalist governing body was based in Wheeling, Virginia, in the Western part of the state. This new government purported to represent Virginia, but in fact was only elected by those in the Western counties. Its elected Senators were accepted by Congress, and President Lincoln recognized it as the legitimate government of Virginia.

Up Next: West Virginia’s Path to Statehood