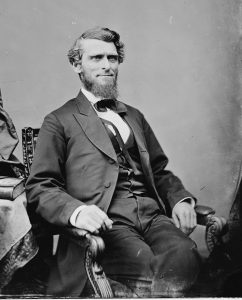 Arthur I. Boreman, who presided over the Second Wheeling Convention. Mathew Brady, Library of Congress Prints and Photographs Division.

The First Wheeling Convention originally met to find a way to repeal Virginia’s Ordinance of Secession. Some members of the convention thought they should wait to see if the ordinance of secession would be ratified by popular vote. Others, like John S. Carlile, thought they should show loyalty to the Union. Carlile  proposed the “New State of Virginia.” He claimed having this new state would show loyalty to the Union forces. From his proposal, the Restored Government of Virginia was born.  Waitman T. Willey said the idea of secession from Virginia would be “triple treason” against the state of Virginia, The United States, and the Confederacy.

The Second Wheeling Convention highlighted the tensions between the Eastern and Western parts of Virginia. It was clear to all of those that were in attendance that there was a division between the two parts of the state that would not be able to come back together. However, they also struggled with the legality of secession. Who do they secede from first? The Confederacy or the state? There was no guarantee that they would be welcomed back into the Union.

John Carlile wrote “A Declaration of the People of Virginia” in which he argued that the Virginia Declaration of Rights stated that any change in state government must be approved by a referendum. Because the Secession Convention did not have a referendum, all of its acts were seen as null and void. This includes Virginia’s secession from the Union. Since the justification, the Restored Government of Virginia began to fill out with new officers.

Up next: Political Profiles