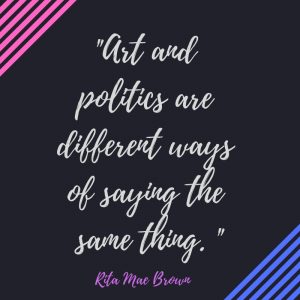 In the midst of articles about  ideology, politics, and culture, the Furies still made space for creative works from both their own members and lesbians outside of their collective in their periodicals. The collective’s work is of an inherently political nature and their art is no different. “Like most people of Western Culture I had unwittingly dichotomized art and politics,” Rita Mae Brown admits, “…Art and politics are different ways of saying the same thing.”1 A creative writer and, later, a prolific novelist herself, even Brown grapples with the idea of art as a political force. The Furies included poetry and short prose works, written by and for lesbians, in the hopes of providing a space for their creative voices.

Poetry is one of the most intimate and revealing views that the periodicals provide into the lesbian experience. For example, the Furies provide The Hand that Cradles the Rock, the first collection of poems published by Rita Mae Brown, with a spotlight in which they review and print a handful of poems. In these short poems, Brown writes about the lesbian experience, male supremacy, and class. In “Sappho’s Reply,” Brown gives voice to the ancient Greek and presumably lesbian writer, Sappho.

My voice rings down through thousands of years

To coil around your body and give you strength,

You who have wept in direct sunlight,

Who have hungered in invisible chains,

Tremble to the cadence of my legacy:

An army of lovers shall not fail.2

This poem is an example of what the majority of the poetry featured in The Furies does: gives life to the trials and strength of women who love women. The imagery of weeping and chains used here represents the oppression that lesbians, including Sappho, have faced throughout the ages. The utilization of Sappho as a speaker invokes the Greek mythology that the Furies themselves are based upon; to them, female figures in Greek myths embody strength and power, two identifiers that women have not been allowed throughout history. Some of the other poetry collections that The Furies feature and review include Edward the Dyke by Judy Grahn, Child of Myself by Pat Parker, and Oranges at Wandegeya by Jay Williams, among others.

The Furies also features a variety of short fiction pieces that provide insight into the lesbian experience. Like the poetry featured in the periodicals, the prose also focuses on the lesbian experience. In “Jamie: A Short Story,” Helaine Harris writes about a 17-year-old girl who leaves home and makes her way from one coast of the United States to the other, working odd jobs to survive. When she decides to settle down in one place, she falls in love with Fran, a 26-year-old woman, and obscures her age from her. After they fall in love and begin living together, Jamie finally confronts Fran about her actual age; although Fran does not initially react negatively, she starts to treat Jamie with much more caution than she did before.3 “You say that my experiences aren’t as real or important as yours because I’m younger,” Jamie explodes one morning, “…I left home to get away from just that kind of shit, and I don’t plan to stay and take it here.”4 Harris paints a picture of a young lesbian with an experience not unlike many of the Furies had: one of rejection, discovery, and growth. The main character feels rejected by her family, community, and lover due to both her sexuality and her age. The Furies were all young, and while some were more experienced than others, all were aware that the ideas of older lesbians are prioritized. Other examples of prose that were featured in The Furies include “The Dentist” and “I Was a Teenaged Lesbian.” Once again, these stories provide a way for lesbians to voice their experiences in an artistic way.

By including creative voices in The Furies periodicals, the Furies created a space in which lesbian voices could exist. Moreover, they created a space in which art shapes and is shaped by politics. By including these creative works, the Furies invoke a pathos in their readers that assists in the conveyance of the lesbian experience and its contribution to lesbian-feminist ideology.