2.4 The Revolution Reaches The Grants 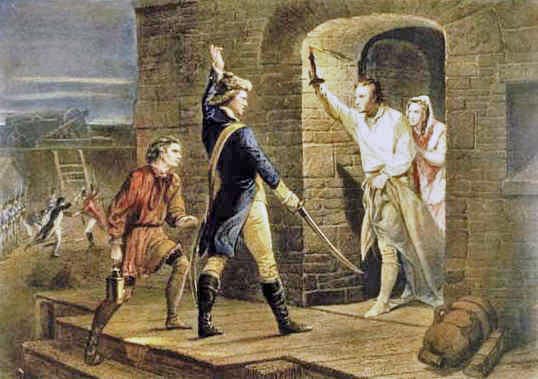 Upon word of the battles of Lexington and Concord, the leaders of the Grants territory felt solidarity with their American brethren, holding council with other committees of safety from Massachusetts and Connecticut. They knew that the Green Mountain Boys were the best bet for a trained and well armed fighting force that was available at the time [1]. During their meetings, they decided that Ethan Allen should lead an attack on the vital northern Fort Ticonderoga and Crown Point in Upstate New York. The attacks were a great success, capturing 120 cannons and gaining the respect of the Continental Congress, which paid them for their work and pressured New York to recognize them as a legitimate regiment of the New York militia, which New York allowed [2]. Still in power over the Grants, the Green Mountain Boys no longer had to defend them actively now that New York was part of the American Revolution.