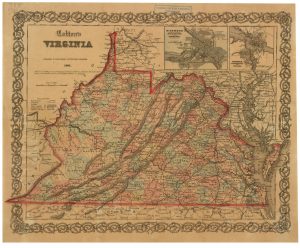 Though West Virginia’s secession was precipitated by Virginia seceding from the United States, the West had long had major grievances with the Eastern part of the state. Virginia’s original Constitution granted the vote only to landowning white males. This disadvantaged western Virginians, as they were less likely to own land. In addition to this, each county was to have only two delegates to the General Assembly regardless of size, another measure which disproportionately benefited the eastern Tidewater region. Representation in the Senate was based on total population. This also gave more representation to easterners, as westerners were less likely to own slaves. Long before the events of the Civil War western Virginians began to push for proportionate representation based on universal white male suffrage, feeling that they were not fairly represented in government.

Up Next: Constitutional Conventions